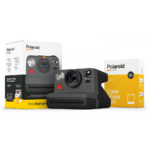 A simple and fun camera with a true point-and-shoot ethos, the black Polaroid Now is a modern and up-to-date take on a traditional instant film camera. Intuitive handling pairs with a unique dual lens system for autofocus operation that shifts between a dedicated close-up lens, for working with subjects as close as 1.8′ away, and a distance lens for working with subjects from 2′ to infinity. The camera features a built-in lithium-ion battery, making it compatible with the battery-less i-Type instant film for producing 3.1 x 3.1″ prints; however, it is also compatible with 600-type film if needed. The camera’s design incorporates a bright optical viewfinder, a built-in flash, a self-timer, and double exposure functions, and it has a familiar form factor reminiscent of Polaroid cameras from the 1970s.

What’s in the box