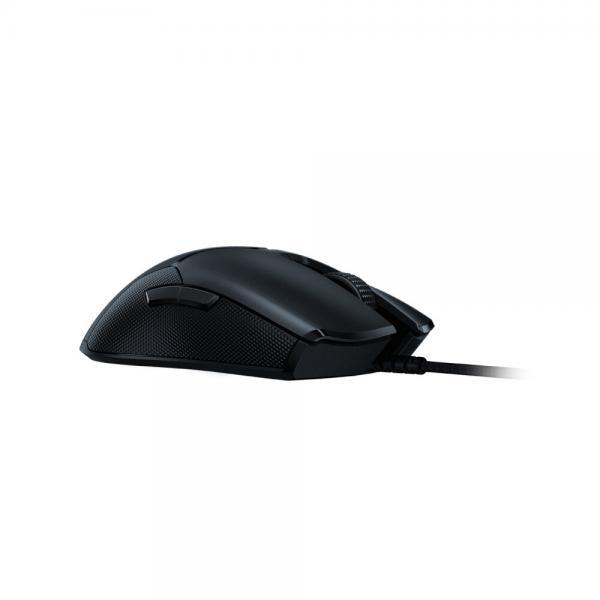 Attain the next level of absolute control with the Razer Viper 8KHz—an ambidextrous esports gaming mouse with a true 8000 Hz polling rate for the fastest speed and lowest latency ever achieved. Upgraded with 2nd-gen Razer™ Optical Switches, it’s time to rise to the occasion and leave it all on the floor.

Razer™ HyperPolling Technology surpasses the industry standard with a true 8000 Hz polling rate— sending up to 8 times more data in a second and reducing delay from 1 to 1/8th of a millisecond.

Improved with greater tactile feedback, every click now feels and sounds more satisfying. And with no need for a debounce delay used in traditional switches, this lightning-fast actuation is complemented by Razer™ HyperPolling Technology to provide the lowest input latency that gets you closer to playing like a pro.

With an industry-leading 99.6% resolution accuracy, even the finest movement from this ambidextrous esports gaming mouse is tracked with consistency. Equipped with intelligent functions, the sensor becomes even more accurate, allowing for an acute level of precision for game-winning headshots.

A HEAVY-HITTER THAT WEIGHS ANYTHING BUT.

Enjoy faster and smoother control with one of the lightest gaming mice in the market. Weighing just 71g, what’s even more impressive is that it achieves its weight without compromising on the build strength of its ambidextrous form factor.

Be ready to compete anywhere with up to 5 stored profiles that give you access to optimal key binds, macros, and twice the inputs via the Razer HyperShift function.

For more secure swipes, the mouse has rubber grips that fully cover its left and right side—moulded as part of the shell to ensure they never peel off.

This ambidextrous esports gaming mouse is able to glide across any surface thanks to mouse feet made from the purest, highest grade of PTFE.

Fully configurable via Razer Synapse 3, the 8 programmable buttons let you access macros and secondary functions for an advanced degree of control.

With 16.8 million colours, countless patterns, dynamic in-game lighting effects—experience full RGB customization and deeper immersion with the world’s largest lighting ecosystem for gaming devices. Supporting a growing list of thousands of devices and hundreds of games & applications, take it to the next level with advanced features such as Chroma Studio, Visualizer, Connect and Workshop.

There are no reviews yet.

We use cookies on our website to give you the most relevant experience by remembering your preferences and repeat visits. By clicking “Accept All”, you consent to the use of ALL the cookies. However, you may visit "Cookie Settings" to provide a controlled consent.
Cookie SettingsAccept All
Manage consent

This website uses cookies to improve your experience while you navigate through the website. Out of these, the cookies that are categorized as necessary are stored on your browser as they are essential for the working of basic functionalities of the website. We also use third-party cookies that help us analyze and understand how you use this website. These cookies will be stored in your browser only with your consent. You also have the option to opt-out of these cookies. But opting out of some of these cookies may affect your browsing experience.
Necessary Always Enabled
Necessary cookies are absolutely essential for the website to function properly. These cookies ensure basic functionalities and security features of the website, anonymously.
Functional
Functional cookies help to perform certain functionalities like sharing the content of the website on social media platforms, collect feedbacks, and other third-party features.
Performance
Performance cookies are used to understand and analyze the key performance indexes of the website which helps in delivering a better user experience for the visitors.
Analytics
Analytical cookies are used to understand how visitors interact with the website. These cookies help provide information on metrics the number of visitors, bounce rate, traffic source, etc.
Advertisement
Advertisement cookies are used to provide visitors with relevant ads and marketing campaigns. These cookies track visitors across websites and collect information to provide customized ads.
Others
Other uncategorized cookies are those that are being analyzed and have not been classified into a category as yet.
SAVE & ACCEPT
Powered by

Create an account
Or
Connect with:
Login with Facebook
Login with Google
Product added!
The product is already in the wishlist!
Popular Search